Leon Maurer has a Bachelor of Chemical Engineering degree from the Georgia Institute of Technology specializing in atomic energy, electronic control systems and communication network systems, with additional studies in modern physics, material science, ceramics, architectural engineering. He has completed graduate studies in communication arts at the New York Institute of Technology, instructed graduate level advanced courses in motion picture special effects, and had done pioneering work in the early development of 3-D computer graphic animation and CGI special effects systems at the NYIT Visual Arts Center and Computer Graphics Lab.
He holds patents as one of the earliest inventors of motion control and automatic animation systems, and is an expert in 3-D stereo-optic visual communication systems. For the past 40 years, Maurer has delved deeply into eastern theories of metaphysics, physiology, psychology and consciousness, and has practiced Patanjali's Rajah Yoga of Mind Awakening.
Maurer's Astro Biological Coenergetic (ABC) holographic field theory of mind is based on a cosmogenesis that postulates subjective consciousness (awareness, will) as a fundamental a priori quality of the underlying, ubiquitous, unconditioned Absolute Space...
This theory further postulates that total gravitational space, it's involved hyperspace, and all mass energy form/fields in metric physical/material space are generated from the spin momentum (ZPE) of a "singularity" surrounding a zero-point of absolute space... These initial fields appear as a (coadunate but not consubstantial) fractal involved series of harmonic radiant energy fields, that descend from near infinite frequency spectrum phase/orders to near zero spectrum phase order (on our lowest order physical/material world).
Since these ZPE fields are everywhere, and their ultimate extension, infinite -- they interpenetrate each other... And, together, constitute the basis of our holographic universe. See how all these fields are analogous with the initial fields of cosmogenesis: 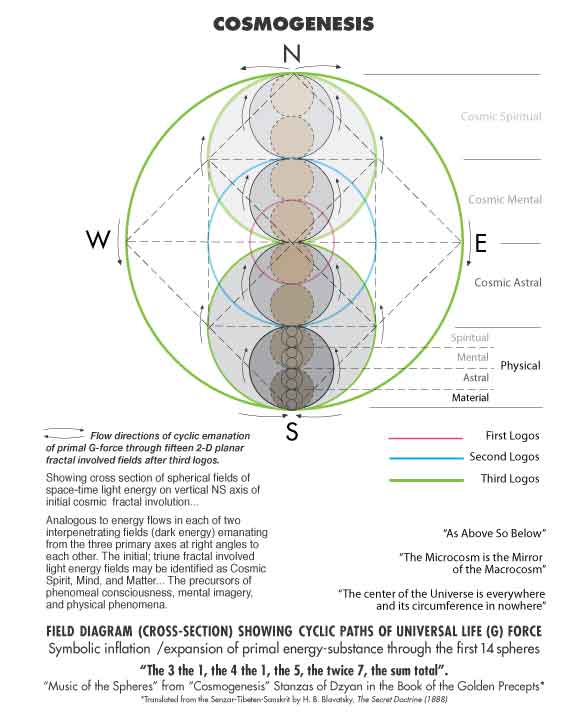 Total Support for This Camp (including sub-camps):
2.03